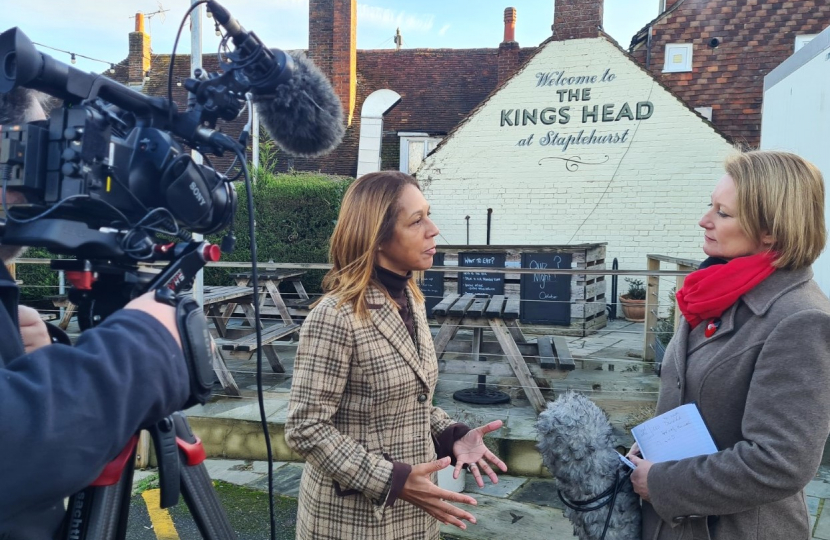 This festive season many of my constituents in the Weald of Kent suffered a total loss of water supply, following the big freeze, just in the critical run up to Christmas.  So, what happened?

From December 7th for 12 days, we experienced sub-zero temperatures, as low as -7° Celsius.  Then, on December 19th, we saw a rapid thaw with a massive 20 degree upward swing to +14°C, in areas in and around the Low and High Weald.  This caused many burst pipes and leaks, some within the mains supply infrastructure, but 7 out of 10 were in shallower and more vulnerable individual household, business and rural pipework systems.

Constituents who directly suffered burst pipes lost water supply until their specific leaks could be located and fixed.  But the combined effect of 300% more bursts than normal led to the loss of 100 million litres of water from the system in 24 hours.  This meant the remaining pressure, in the gravity driven supply system, was inadequate to push water through to people in a much wider area, particularly those on higher ground.

The worst affected areas were in Staplehurst along Bell Lane, certain parts of Marden, Hartley Road in Cranbrook and around the village of Benenden.  In addition to people’s homes being affected, businesses like Iden Manor Farm in Staplehurst were unable to supply drinking water to their livestock, and Staplehurst’s only pub, the Kings Head, had to close for several days, losing them much business and cancelled Christmas Parties at a critical time of year.

My office first started receiving calls on the 19th and my own phone didn’t stop ringing until Christmas lunch time. The main thing that was upsetting people was poor communication with South East Water (SEW).  Many could not get through to the emergency lines, and many of those who did were given inaccurate expectations as to when supply would resume.

Also, the nearest emergency water supply station that was set up to provide for Benenden and Cranbrook residents was 14 miles away in Pembury.  Really?

To their credit, SEW had engineering teams out every day, working to locate and fix leaks and restore the water pressure, including on Christmas Day, Boxing Day and New Years’ Day.  As a result, almost everyone had their water back by Christmas lunchtime, and the Kings Head was able to re-open on Boxing Day.

In a meeting I had this week with SEW, they explained to me the enormous scale of the underlying problem, which is much to do with the effects of climate change and antiquated infrastructure.  SEW say they are addressing this through their Water Resources Management Plan, which shows how they are planning to meet the water resource needs of our region over the next 50 years.

This affects us all and it is important. Stakeholders and customers are strongly invited to engage with the consultation on the plan, which closes on 23rd February 2023 – click this link for more information.

Together with our local authorities, I am meeting again with SEW later in January, once they have had the time to gather all of the facts surrounding the major water outage we suffered before Christmas.  I understand they will then set out any other shorter-term measures they will be taking to avoid a repetition of the event.

For anyone seeking compensation, you are advised to firstly look at your own insurance cover. SEW say they may also be able to help with certain uninsured losses arising from the loss of water supply.  My team are actively assisting constituents and businesses on this issue, so do get in touch if you feel we can help.