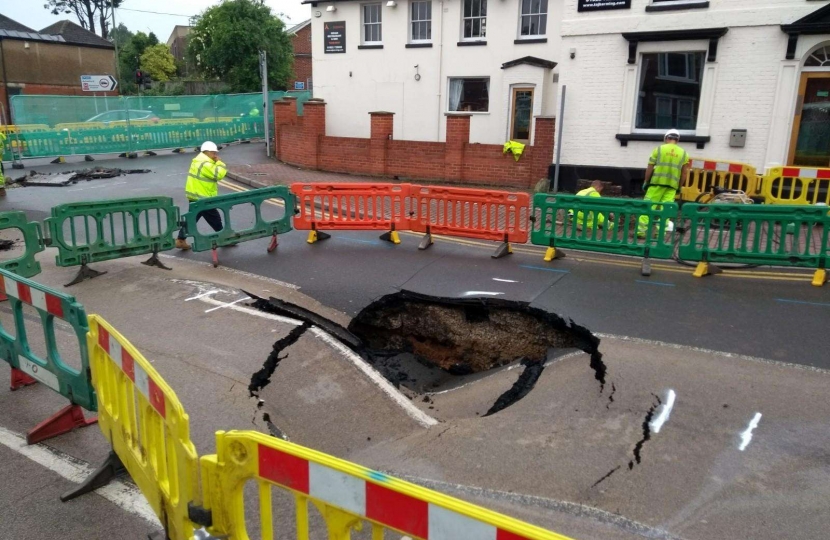 Earlier this month, Maidstone Borough Council published its Draft Local Plan Review. This is an important step in ensuring our local plan is up to date and therefore our community is protected from speculative housing applications by developers.  I am grateful to councillors and officers at MBC for their hard work in bringing the document together.

Furthermore, I am delighted that the document does not include the proposed development of 2000 new homes in Marden. These plans were totally inappropriate and threatened to ruin the unique rural nature of the village. Their rejection is a huge victory for local people and I pay tribute to Claudine Russell and her magnificent team for campaigning so effectively against the plans. They have proved what can be achieved when a community joins together to champion a common cause.

Meanwhile, in the west of Maidstone, I continue to harbour serious concerns about the link between housing development in the area and the appearance of numerous sink holes. The materialisation of sink holes at the Orchard Fields development and at the nearby South East Water reservoir, added to the major crevices on the Tonbridge Road and on Broomshaw Road in recent times, is extremely worrying. That is why, alongside my colleague and neighbour Tracey Crouch, I am calling for an immediate building moratorium to be imposed in the area whilst a full geological survey is undertaken.

All of this is set to the backdrop of the Government’s plans to increase housing targets for our part of Kent. The situation in Barming reaffirms how crucial it is that the Government reconsider their plans which, as they currently stand, would impose 78% more homes on Maidstone. Areas like Hermitage Lane prove that our infrastructure is already under chronic strain and that we simply couldn’t cope with the increased housing numbers that are being proposed.

Late last month, I therefore led a delegation of Kent MPs to meet with the Housing Minister Christopher Pincher. We asked him to think again about the plans the Government are proposing and relieve the disproportionate housing burden they place on Kent. In response, the Minister confirmed the Government was actively looking at responses to its consultation and will be bringing forward revised plans soon.

In recent days, I’ve heard whispers that these plans may include a fundamental revision of the housing formula. Let us hope that is the case and some common sense prevails!