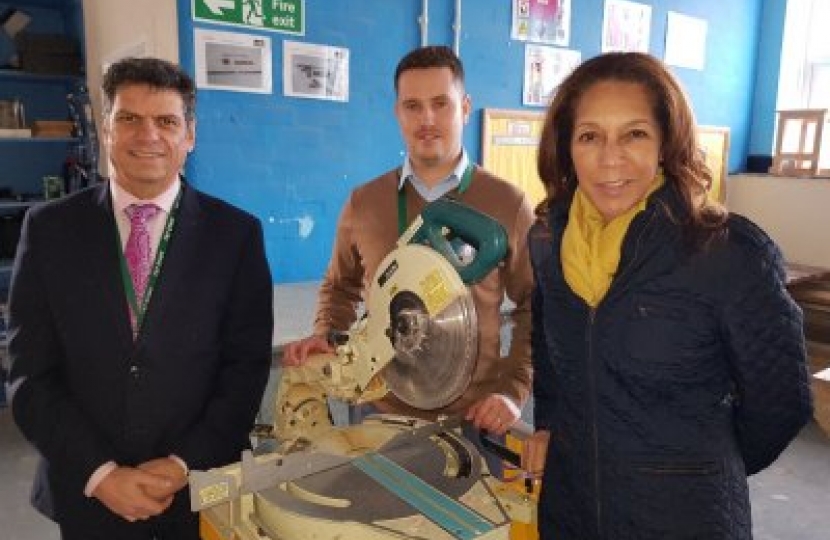 Maidstone and Weald MP Helen Grant has applauded a ground-breaking initiative by a Maidstone schools' trust.

The MP visited New Line Learning in Loose to see the Gateway – a new provision for children who potentially could face exclusion – set up by the Future Schools Trust.

The Gateway, on the Boughton Lane campus, is designed to be an early intervention provision, allowing pupils to remain within mainstream education, while developing their individual skills specifically geared towards concerns raised by their host schools.

The Gateway only opened in September but it has already had a remarkable success in retaining students in school at a time when the number of children being excluded from schools nationwide is on the increase.

It caters for students from Future Schools Trust's two academies – New Line Learning and Cornwallis - who have complex difficulties, which have led to disruption in the classroom. In the past, many of these would have been sent to a pupil referral unit or provision away from the school campus – often, never to return.

The Government's select committee is currently looking at the effectiveness of such pupil referral units in comparison with in-house provision like the Gateway, which the MP applauded for its innovative approach.

She was shown around by Head of Gateway James Graham and FST's Acting Head of Business Operations Ari Kotsis, where she met staff and looked around the Gateway, including their joinery and construction unit.

Following the visit, she said: "From my tour of the Gateway and my talks with the Head James Graham and it is clear The Gateway is getting results for young people with complex barriers to learning.

"Daily liaison with parents at home is a cornerstone of the service which seems to be well received by all parties. I commend this model approach and hope they will be able to extend the facility for more students if given the necessary funding."

Future Schools Trust believes it has a model which other schools will follow.

Mr Graham said: "It is early days, as the Gateway only opened at the beginning of this academic year, but the signs so far are that pupils are prepared to come to school each day and show a willingness to learn, which can only be for the good."

Mr Kotsis said: "Our aim is to teach practical skills whilst reinforcing the need for academic rigour. All pupils need to learn how to control their emotions whilst appreciating that they need basic Maths and English to give them the best chance of securing a job."