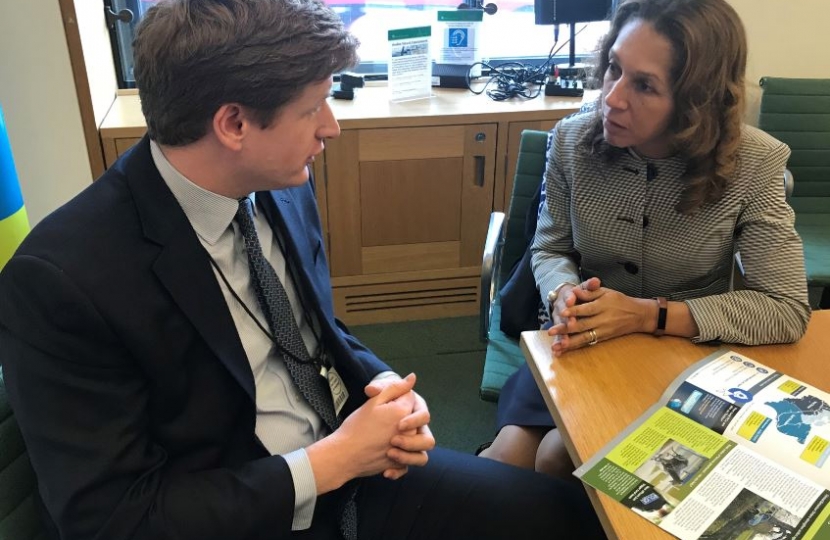 During their meeting, Helen explained that many of her constituents are concerned about crime and anti-social behaviour in Maidstone Town Centre, particularly in the area close to Brenchley Gardens. She has received numerous reports of drug taking and other intimidating behaviour in the area and staff at her constituency office, located nearby, have previously called the emergency services to report incidents of suspicious behaviour in the park.

Helen urged Mr Scott to encourage senior officers to utilise some of the more than 200 extra police officers he and Kent police have recruited across the County to increase the uniformed police presence in Maidstone Town Centre. As a result of their discussion Mr Scott has promised to raise the issues around Brenchley Gardens with Kent Police.

Helen said, ‘Matthew is doing a fabulous job as our police and crime commissioner and his efforts to recruit over 200 extra police officers across Kent are hugely welcome.

I am very hopeful that this superb new resource can be put to use in Maidstone Town Centre, particularly in the area surrounding Brenchley Gardens where many of my constituents have become concerned about anti-social and illegal behaviour. An increased uniform presence would make a vital difference; making local people feel safer and encouraging more people to visit our wonderful town centre. I am reassured that Matthew is going to raise this as a matter of priority with Kent Police.’

Matthew Scott said, ‘Communities across Kent are already benefiting from the fact there are around 270 more police officers in the county compared with when I took office in 2016. However, with the extra demand officers are facing we simply need more of them.

‘I am proposing using an increase in council tax to fund the recruitment of another 180 fully-warranted police officers this year, meaning there will be 450 more police officers in Kent than when I was elected. I have already had assurances from the Chief Constable that some of these new recruits would be deployed to our town centres. Residents can let me know what they think of the idea by contacting my office before January 29.’

Kent’s beautiful countryside, historic towns, coastal resorts and world leading vineyards combined with its historic status as the Garden of England mean that tourism is at the heart of the county’s economy.