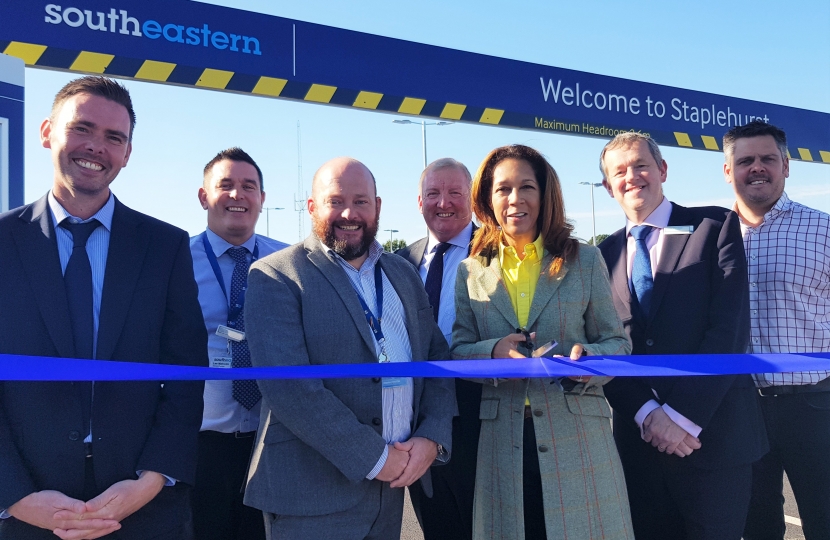 The MP for Maidstone and the Weald, Helen Grant, has officially unveiled a major £1.1 million expansion and upgrade of the car park at Staplehurst station, in response to the growing demand from regular commuters and higher numbers of passengers at the station.

Work began on the scheme, part of Southeastern’s Partnership Plan for Britain’s Prosperity in South East London and Kent, in April.

The work has included the creation of 224 additional car park spaces, as well as improvements to CCTV and lighting, which will improve security and transform a previously neglected piece of land.

Southeastern has carefully adapted the design of the existing car park to ensure that more parking spaces are available, improving access for both pedestrians and traffic in the surrounding area. Construction of the expanded car park has been completed on time and on budget, and Southeastern has liaised with local residents to keep them informed and updated during the work.

“We’re pleased to have been able to make this investment in expanding the car park at Staplehurst station, as we know that this is what our regular customers have been asking for. Regular commuters and leisure travellers alike should see a big difference”.

Helen Grant, Member of Parliament for Maidstone and The Weald said:

“I am pleased that this much needed upgrade to the car park at Staplehurst Station has now been completed.

“I have, over recent years, shared with Southeastern a range of my constituents’ concerns about the Staplehurst station car park and I also hope that this will be part of a wider drive to boost capacity and facilities at our rural stations across Maidstone and the Weald.”

On the campaign trail across Maidstone & The Weald this year there was an unusually strong level of engagement from people on the doorstep.  There was a heightened level of understanding about how important our local authorities and elected representatives are, almost certainly as a result of