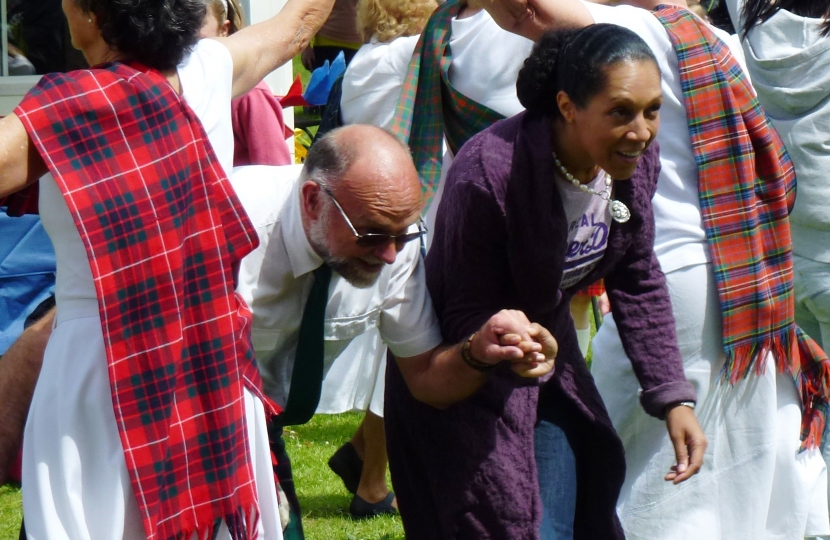 Shortly after becoming MP for Maidstone & The Weald in 2010 I was invited to become Honorary Vice-President of the Maidstone MENCAP Trust.  I felt honoured to be asked to take over Ann Widdecombe’s former role and I accepted immediately.

Since then I have enjoyed working with Mencap on a range of fundraising events as well as learning about the vital work undertaken by their dedicated volunteers.

For readers unfamiliar with the charity, their work seeks to enable and empower children & adults with a learning disability, and their families and carers, to achieve their full potential.  They provide care, education and therapy from early years onwards and surround them with quality social & leisure activities.

One of my earliest engagements was to present a cheque to Mencap from the Cobtree Scottish Dancers at their summer fayre in Mote Park.  What I didn’t know was that I was also required to participate in doing a Scottish Reel with the tartan kilted troupe.

That was the start of a now longstanding relationship where I have been able to play a small part in the ongoing challenge of keeping the funds rolling in every year and keeping the service alive for many vulnerable people.

Until recently the President of the Board of Trustees was Andrew Wells, son of former MP for Maidstone, the late Sir John Wells.  After six successful years in post Andrew decided to step down and I was delighted when the Board invited me to take over the reins.

My role remains focussed on fundraising and keeping the profile of Maidstone Mencap high in the minds of local people.  I would also welcome any approaches by individuals who might consider volunteering – the work is hugely fulfilling and changes lives.  Go to www.maidstonemencap.org/work-with-us for more.  I would also like to thank the KM who always do their utmost to publicise and promote the Charity.