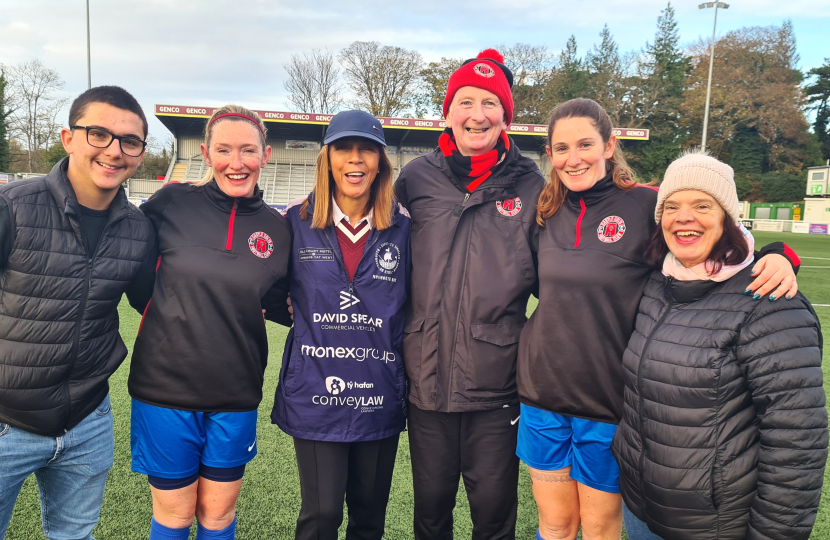 It started in 1994 when two Allington Mums asked Castle Colts boys’ team referee, Barrie Ivens, if he would coach a kick-around for their two daughters.  Five 11-year-old girls turned up that first week, then 10 the following week and 15 the week after that.

A year later their team won their first tournament in Medway against four other fledgling girls’ teams and the Kent Girls and Ladies Football League was set up shortly after with the help of Medway Council.

25 years later there are 80 teams in the league and Barrie and his wife Sallyann, married 34 years ago, are still developing and managing the ladies and girls’ teams for the Castle Colts in Allington, Maidstone.

Allington Borough Councillor Stanley Forecast approached local MP Helen Grant about Barrie’s long and dedicated service to the Colts and arrangements were then made with Maidstone United Football Club to stage a presentation for Mr Ivens at the Gallagher Stadium.  On Sunday 20th November, where the Colts had a fixture against MUFC’s girls development team, a guard of honour lined up to welcome Barrie and his wife onto the pitch to a great round of applause.  There he was presented with a bottle of wine signed by the Prime Minister Rishi Sunak, by Helen Grant MP and Councillor Forecast.

Helen said ‘Sport played a very important part in my life growing up – not just the mental and physical health and fitness, but all the life lessons that sport provides – like leadership, teamwork, discipline and respect.  Thank you Barrie for creating such a brilliant platform for girls and women to participate in sport’.

Barrie said ‘‘I’ve never done this for recognition, it’s always been about the players and their football.  This is quite overwhelming and thank you to everyone for coming here today.’

The Colts went on to win their match against MUFC 5 nil.  Mr and Mrs Ivens have two daughters, Liz and Emma, both of whom play for the club.  Liz is Assistant Manager for the ladies team as well as managing the Colt’s Under 15 Girls team.

Since 2020 Barrie has been fighting cancer which has taken its toll, but the couple are hopeful he is now clear.