House Building in The Weald 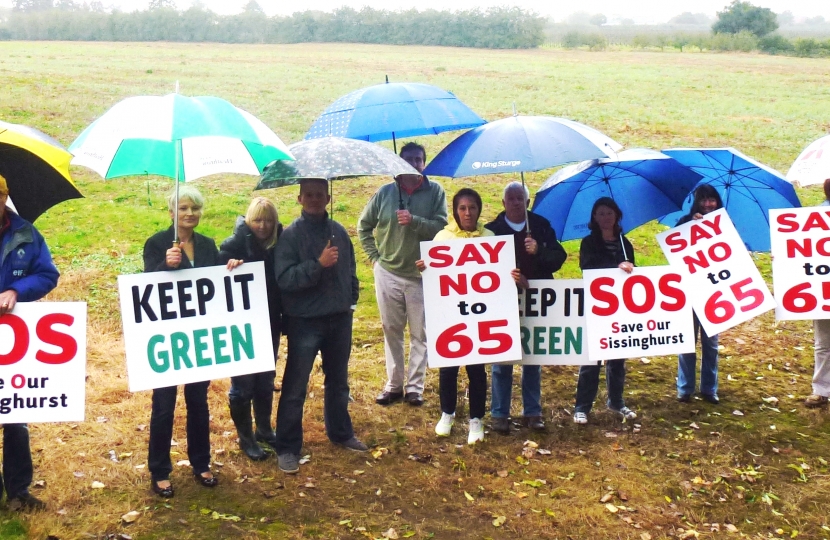 Since I became the MP for Maidstone and The Weald in 2010, I have been visibly and publicly opposed to the number of houses which central Government have imposed on our part of Kent. Frankly, the targets are too high for the already over-stretched infrastructure and I am ever fearful of the impact upon our precious rural communities.

In addition to making formal representations at the Maidstone local plan consultations I have been involved in several community efforts to protect our green spaces, including; ‘No to 65’ in Sissinghurst,  ‘Hands off Coxheath’, ‘Save Fant Farm’ in Maidstone and the ongoing ‘No to 2000’ campaign in Marden. Some we win and some we don't, but either way we have been known to give a developer or two a bloody nose and demonstrate the power that communities can have when they come together in an organised way.

Most recently I have been in contact with Chris Pincher, the Housing Minister, to convey my strong view that the housing targets for local authorities in West Kent should be reduced. I made clear to him that at the very least I would hope that the timescales by which these houses must be delivered could be increased to give our councils greater flexibility.

I know that Tunbridge Wells Borough Council (TWBC) are currently considering the some 8,000 responses they received during the public consultation on their draft local plan. They currently intend to publish a revised draft of the plan before the end of this year and I will be meeting with the Chief Executive and Leader of TWBC shortly to discuss their progress with this vitally important task.

Whilst my work to reduce the housing burden for our community will continue unabated, we still need to find a way of delivering the homes that our children and grandchildren need. I do believe that garden communities could form an important part of the solution to this conundrum. They must, however, be properly planned with appropriate transport connections and sufficient facilities for health, education and convenience stores.

Properly planned garden communities would negate the need for inappropriate piecemeal developments, such as that proposed for Turnden near Cranbrook. I have already raised my fundamental opposition to this development with TWBC and hope they will take into account the serious concerns held by local people when coming to a decision.

In the meantime, I will continue to do everything I can to ensure that new homes are only built in the right numbers, in the right places and with the necessary supporting infrastructure.