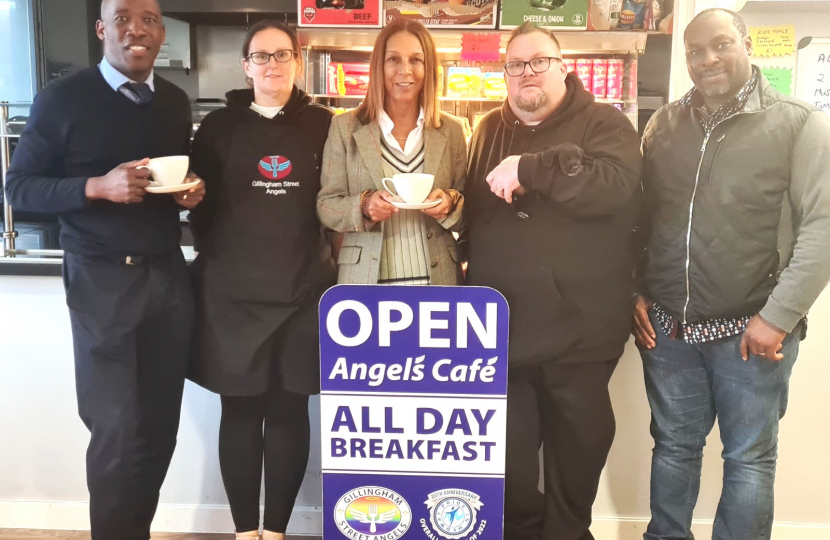 A successful Medway charity has just extended its reach to Maidstone with the opening of a new café in Thomas Place ME14 1FP, just behind Maidstone Library & opposite Maidstone United’s Gallagher Stadium in James Whatman Way.

The Charity’s mission is focussed upon supplying food parcels for the homeless and vulnerable people of all ages, from their own foodbanks and soup kitchens.  The café is run by volunteers and all profits go into the charity.

CEO of Gillingham Street Angels Neil Charlick invited local MP Helen Grant to visit the facility to help them raise local awareness of their offering as the winter draws in.   Helen said ‘This is a great initiative which comes at a time of hugely escalating need in the local community.  As it is across the whole country, Maidstone residents are facing huge challenges brought about by the Cost-Of-Living crisis.  I am working with the Street Angels on an opening event to promote their services, bringing all of the local stakeholders together, and details of this will be circulated very shortly.’

‘On the day we met, Neil was holding a recently born spaniel puppy in his arms, rescued from a crack house earlier that day.  I must say that if Neil was not giving this little dog a home himself, I would have put in a bid for sure.  The puppy’s name is Street, and joins another rescue at Neil’s home, appropriately called Angel’.