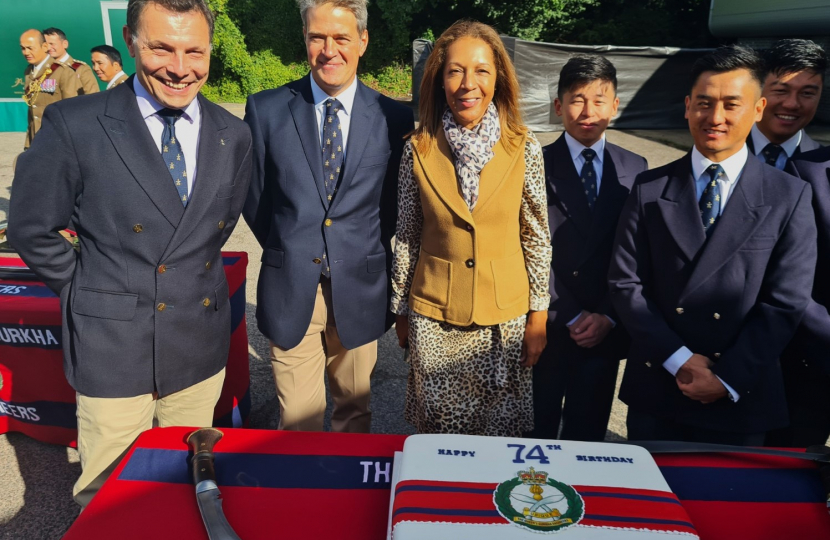 The event was an opportunity for Helen to talk with servicemen from all ranks about their current operations and their recent role in the late Queen Elizabeth’s funeral service.  She also met with former Commanding Officer Col. Richard Walker OBE, who she knew from his time in post in 2016, and who is now Chairman of The Queen’s Gurkha Engineers Association, and Chief Executive of armed forces charity The Not Forgotten (www.thenotforgotten.org).

Helen said ‘The armed forces have a special place in my heart and it is always a pleasure to visit our Queen’s Gurkha Engineers and 36 Engineers.  Invicta Park Barracks have been under threat of closure and disposal for several years and I have campaigned against this since 2016.  I remain convinced that retaining the barracks is vital for Maidstone, both economically and culturally, and I hope to work with the MOD and Army in achieving that goal.   Invicta Park Barracks and our Engineer Regiments are also strategically important for the whole of the Kent / SE region.  As the war in Ukraine causes huge upheavals across Europe I can foresee the army reviewing their plans to close by 2029 and I will do all I can to promote those considerations’.

Richard Walker said ‘this event brings together serving and retired members of the Regimental family, many of whom have settled in Maidstone and the surrounding areas. The Regiment has always treasured the special relationship that it has with Maidstone and more broadly the South East and has added great value to the region both culturally, but also supporting many UK resilience tasks in Kent over the years. Defence basing planning is complex and ultimately the Regiment has to locate where it naturally sits within the Army’s order of battle; luckily for the QGE, that has been Kent for all of its UK based history’.