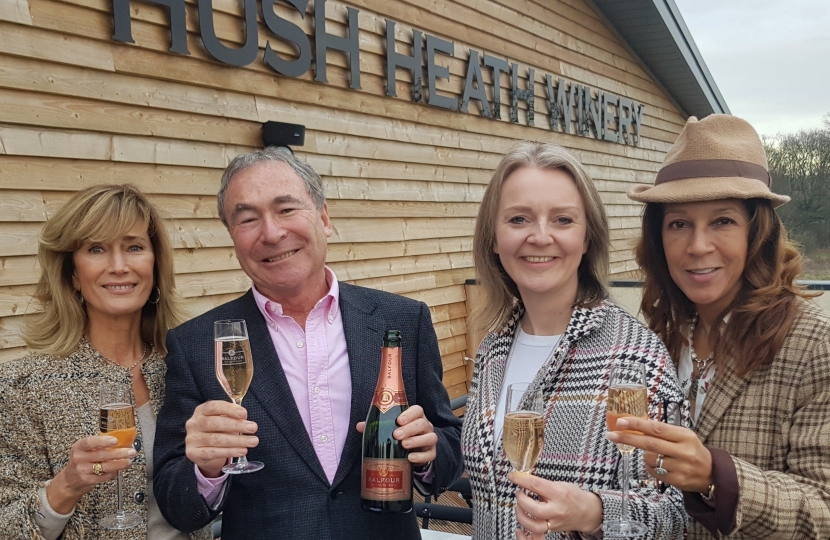 Staplehurst winery Hush Heath received a special visit last week as Chief Secretary to the Treasury, Liz Truss MP dropped by as part of her tour of the South East’s finest food and drink producers.

The Cabinet Minister was joined by Maidstone and the Weald MP Helen Grant MP and local borough councillors Louise Brice and John Perry. The guests enjoyed a tour of the unique facilities at Hush Heath, including the state of the art new winery and the orchards. They were also able to sample a magnificent range of Hush Heath’s sparkling produce.

The Chief Secretary then joined Hush Heath’s team for a productive discussion about the opportunities for growth in the export market for English wine and how the Government could support its expansion. The Chief Secretary was particularly interested to learn that Hush Heath are already exporting around the globe to countries such as China, the USA and Canada. She was also able to discover more about the ever growing tourism market developing alongside English wine producers; which has become a mainstay of Kent’s rural economy.

Following the visit, Helen Grant MP hosted the Chief Secretary for a meeting at her Maidstone constituency office with local borough councillors. The councillors discussed the recent local government finance settlement, planning regulations and funding for social care. During the meeting, the Chief Secretary acknowledged the need for greater investment in Kentish infrastructure, particularly fibre broadband and highways.

Chief Secretary to the Treasury Liz Truss MP said, ‘The South East is leading the way as one of the UK’s strongest exporting regions, offering impressive local-grown produce. People around the world enjoy the best of British cheese and wine and we want this success to continue, ensuring UK businesses have every opportunity to increase their trade which will lead to more jobs and higher wages.’

Helen Grant MP said, ‘It was my absolute pleasure to welcome Liz to the fabulous Hush Heath winery. Hush Heath’s trademark sparkling wine is the perfect example of high quality Kenitsh produce being exported around the world to great success.  I was very encouraged to hear from Liz that the Treasury will continue to prioritise support for British produce exporters, such as Hush Heath, to allow them to grow from strength to strength.

Richard Balfour Lynn, wine producer at Hush Heath said, ‘“ Leslie and I very much enjoyed the wide ranging discussions as to how Government can support the exciting growth of English Wines and in particular wine tourism that plays such an important part in the rural economy . “